Fifth Wheel campers can be classified as travel trailers as they are hitched up to a larger truck or a van.....

Since the weight of the hitch is focused directly above the towing truck's rear tires, fifth wheel campers are very easy for maneuvering while driving.

At the same time, they are very sturdy and very secure while being towed.

This type of campers has become highly popular among most camping enthusiasts around the United States and Canada because they can provide enough space for several people to live in them for a longer period.

One of the best advantages of fifth wheel campers, which most camper fans love is that they can be easily unhitched from the main vehicle.

This feature allows people to go on daily trips with the main vehicle and without a fifth wheel.

Some people think that fifth wheel campers are not very luxurious campers as some other types of recreational vehicles but in fact, they are maybe the most luxurious type of RVs on the market today.

This is corroborated by the fact that fifth wheel campers can be equipped with full size appliances in the kitchen, in the living room, in the bathroom.

Usually kitchens of the fifth wheel campers include large refrigerators and stoves, while in some models kitchens can be upgraded with full size counter tops to achieve larger area for food preparation. Also they may have larger slide-out pantry for more food storage space. In order to provide more space for cooking, some fifth wheel camper models may include exterior slide-out kitchens or barbecue areas.

As far as living area is concerned, it may include leather recliners, large LCD HD TVs, DVD players, surround sound systems and electric fireplace. Some models may even have space for a computer work station that can be hooked up to the Internet.

Other amenities included in fifth wheel campers are a washer and a dryer unit, showers or tubs in the bathroom, and lot of fifth wheel campers feature enough space for multiple bedrooms and very large beds in them. There is a small disadvantage of the fifth wheel campers that may be large for some people, while many won't even notice that disadvantage. They feature steps for climbing and descending to get in and out of the master bedroom or the living area.

Taking all these amenities included in the fifth wheel campers, they may be considered as perfect motor homes for large families or people who plan to spend a great amount of time out on the road. Larger fifth wheel camper models may sleep five to eight people without a problem with possibility to accommodate a few more people depending on the model. Their prices range from $30,000 and more for smaller models while larger models may cost from up to $100,000 or more. 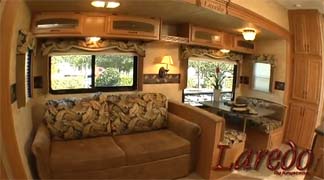 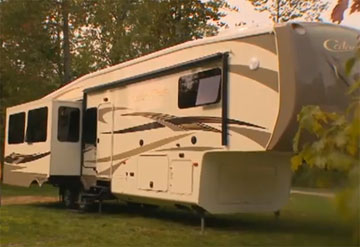 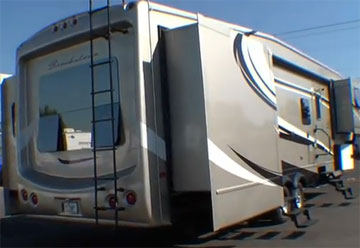 Heartland fifth wheel campers are among the three top brands in the RV industry. These luxurious campers offer all the amenities that one may need while traveling. They all have very functional floor plans with plenty of storage space, free standing dinettes, comfortable queen or king beds. Heartland fifth wheel campers are ideal for full time and seasonal travelers boasting quality construction and easy towing. 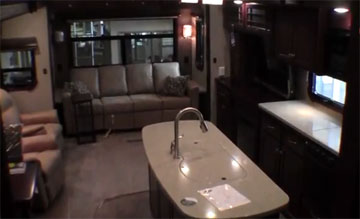 Whether you buy a newer camper or a 1998-1999 or so camper, you can find some good deals with luxury to go along with it.

The luxury size 5th wheels provide for great living conditions when you are out on the road for an extended time.

You can build a fifth wheel or buy one depending on your own needs.

If you travel to North Carolina and then to North Dakota you will want to have a luxury camper that the fifth wheel gives you when traveling for comfort.

Most fifth wheels have upper sleeping quarters aside from the lower sleeping area. The overall length is much smaller than a car and tow behind camper; therefore, it handles much better on the road.

The luxury camper with slide out sides adds more room and gives a large open area when parked. You never get tired of traveling in a fifth wheel because of the comfort you feel and the spacious areas inside.

If you have only a couple of slide outs, you still have plenty of room. The campers come with two slides out, four and five slide outs and three slide outs for a more sizes and space to choose from in a camper.

If you need a great spacious camper, the luxury fifth wheel campers will fill all your needs. It is like living in a motor home without the ability to handle such a big vehicle on the open road. If you want, comfort you need to have a fifth wheel that has all the accessories and the home like feeling.

Find a new or used fifth wheel camper at a local dealer or online through the classifieds. Either way you will find a nice camper for traveling and staying anywhere in the country at a campsite or another area that has hookups for a fifth wheel camper.