FAN coach Company was named after its founder Franklin A. Newcomer who started the travel trailer business at a barn in 1954.

It took him three weeks to build the first FAN, a 14 feet model equipped with a 2-burner plate, ice box, 10-gallon water tank and a pump by the sink.

The next year a 32' x 60' Quonset hut was built replacing the barn as the manufacturing floor.

One year later, in May of 1956, the Quonset hut was moved to Wakarusa (Indiana) and a larger 3200 square foot plant was also built next to it  to meet the increasing demand for FAN’s trailers.

If the expanding production capacity is a measure of success, then it is worth to mention that in January 1965 FAN factory moved to its 73,500 sq ft plant spread out in 52 acres at LaGrange (Indiana) to give space to its more ambitious projects. At that time factory was rolling-out 28 FANs per day.

Subsequently, the business was taken over by W.R. Grace Chemical Company. The new “marriage” turned-out to be unsuccessful, so FAN’s founder again repurchased it later and made it profitable once again. But finally, the travel trailer business collapsed in 1982 after another unsuccessful merger with Coachmen Industries. It seems the company thrived under its founder who lent it his initials (FAN stands for Franklin A. Newcomer), but sadly with no one else. The FAN name was used by the Coachman during few more years but finally the name disappeared from the market in 1985. 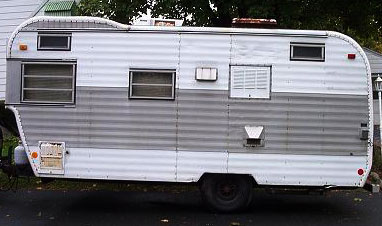 Models produced by FAN had very catchy names such as Lee Liner, Style Liner, Luxury Liner, Crest Liner, El Wood, Sun Seeker, Traveler Twinkle, Monitor and so on. There were eight variants of luxurious Luxury Liners, twelve varieties of style-leading Style Liners, and three varieties of leisure-seeking Lee Liners. And there were literally hundreds of special features ready for all these dozens of models. FANs were built in sizes ranging from 16ft through 17, 20, 22 and 25 to 26 feet lengths. The firm brought many pioneering steps in design and engineering of the travel trailers. For example FAN was the first to use the MOR/ryde suspension system.

Monitor travel trailers came in various lengths - from 13, 15,16, 19 to 22 feet. The same name was also used for the truck camper model. The 16 feet Monitor had a loft sleeping bed and it could sleep six. The 22 feet model was called Monitor Manor and it featured a rear bath and twin beds. 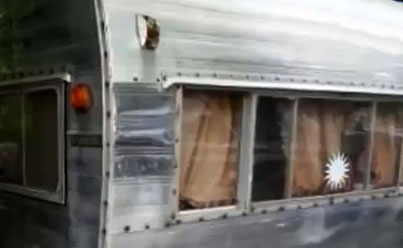 Front-side of the FAN travel trailer

These models were 17 feet long, interior height was a modest 6 feet 2 inches and the width was either 7 feet or 7 and half feet, depending on the model. Sun Seeker was weighting 2130 lbs and the hitch weight of 275 lbs. The refrigerator was either run on gas or electricity, there was also an option to replace fridge by an ice-box. Other features included flush toilet, dinette convertible to bed, vented gas heat-oven stove. The interior was made with birch plywood. Technical features included 7.00 x 15 6-ply truck tires and electric brakes.

The 15 feet long trailer was entirely self-sustaining. This trailer had convertible dinette at front, twin bed at rear, flush toilet and shower on the street side and a multi burner stove kitchen galley on the kerb side. Road Chief came furnished with all mod cons of the day. There was and an 18 feet model of Road Chief that featured brand new positioning with a rear kitchen and street side dinette in the middle section of the trailer. The model was well ventilated. There was a spacious storage trunk at the back of the trailer. On the outside – the Road Chief was characterized by sharp shell with flowing lines.