Airfloat travel trailers were manufactured by entrepreneur Omar Suttles in Los Angeles in 1930.

Airfloat had a long dream run among American camper enthusiasts and movie crew between 1930 and 1957.

The name of the company which produced these trailers is Airfloat Coach Manufacturing Company, Los Angeles, Calif.

With their corrugated aluminum exterior and ribbon mahogany woodwork Airfloat became an instant hit with the connoisseurs.

These trailers are distinguishable by the tiny unopenable round windows on the two sides which gave them a nautical feel.

Subsequently these windows were replaced by rectangular ones which could be opened. Theses early models made extensive use of wood in interiors. The year 1955 was the 25th Anniversary year of Airfloat trailers and to commemorate the occasion the company started to gold-anodize all their trailers.

By 1957 all trailers were gold anodized. Suttles retired in 1956 and Airfloat produced its last trailer in 1957.

Their popularity is well expressed by the motto coined by the Airfloat company:
“Women love them for their beauty 100% individually decorated and men prefer them for their road performance -they are lighter.” 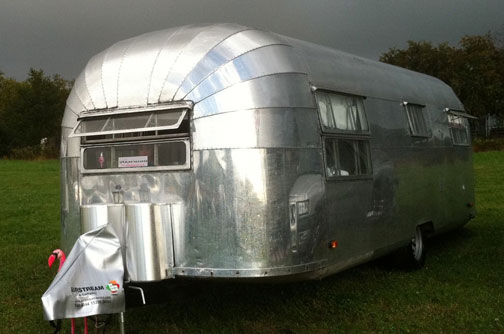 In 1957 Airfloat introduced Cruiser 27 which has a length of 27 feet. Since 1950’s, in the same series of trailers were already models with lengths from 23 to 29 feet. The corrugated aluminum body dotted by gasketted round windows gave Cruiser a smart look.

Wide rectangular and openable windows in front and back made the trailer feel roomy and full of light. Cruiser had a warm couch area for ultimate comfort. Kitchen was spacious with four burners gas oven, double sink and convenient counter. There was large storage space in the kitchen cabinet overhead and below the counter. The corridor flanked by kitchen and living rooms gave Cruiser and luxury liner look.

Airfloat introduced Commodore 3rd Wheel model in 1942. The third wheel, also called “Dolly” and “Slimp” was placed beneath the tongue and coupler of the trailer. This design largely reduced the weight of the hitch. The Commodore 3rd Wheel used Masonite instead of corrugated aluminum deployed in Airfloat models since 1947. The model had single door.

Skipper - smallest model introduced in the year 1957 did not feature the 3rd wheel which had become standard equipment for all models of Airfloat since introduction of the Commodore. Corrugated Aluminum sheets were used for the trailer skin on both sides of flat sheets across the windows. The kitchen was fitted with a full scale compact gas stove.

And now, let's visit Jay Leno's garage to see 2013 Airstream Land Yacht Concept - the latest and most luxurious iteration of an American icon, a 28-foot home away from home!

Landyacht is one of the most successful and popular models released by Airfloat. Starting from 1947 the model continued to be produced till Airfloat ceased operations in 1957. The Landyacht came in a variety of lengths ranging from 23 feet to 30 feet while its luxury model - the Presidential Landyacht went up to 45 feet. The long body with curvaceous finish was lapped up by connoisseurs very eagerly.

The trailer inspired the original book “The Long, Long Trailer” by Clinton “Buddy” Twiss. In 1949 Twiss started on a great adventure with his wife on a 28 feet Landyacht.  The model came with new interior "yacht style" double-doors feature, which enabled the bedroom area to be closed off from the rest of the interior. Indeed, as the name suggests, the Landyacht took the lavishness of the yachting industry and put it on the ground.

The Airfloat’s Landyacht featured in the classic 1957 science-fiction flick "20 Million Miles to Earth".

Go to: Pop-up Campers and RVs