FEMA campers or FEMA travel trailers are somewhat different than most other campers that we know. While they are used by some people as regular travel trailers, their initial purpose was to serve as shelters and temporary housing for victims of hurricanes.

They were used a lot in the USA and their name was assigned by the government of the United States. These campers provide a better shelter than tents, they are safer, warmer and they can be used immediately after a disaster.

Fema campers have a very specific look that makes the stand out. They are white made of a mixture of aluminum and plastic. They have only one small door and small windows. They have a simple robust shape, after all not much effort was put into their design. These camper were made to help people survive and not to be used for leisure and fun.

Fema trailers are mass produced, strong trailers with only a few windows. Most of the models have one bedroom with a big bed, a kitchen with stove and basic facilities, and a bathroom with a shower. These trailers also have air conditioning and heating, running cold and hot water, microwave oven, fridge and some furniture. While they offer the basic things for people who need emergency places to stay, they are also somewhat comfortable. They are connected to a water source and a sewage system.

The downfalls of Fema trailers it that they are poorly insulated and they have only a little storage space. One of the controversies which made these trailers so famous and infamous was the usage of chemicals that happened when the trailers were manufactured.

Many inhabitants of Fema trailers have noticed strange symptoms after living in the trailers, which made them be called toxic trailers after a while. Even though the Fema trailers had some downfalls, overall they were considered a great place to stay for the victims of floods and hurricanes. 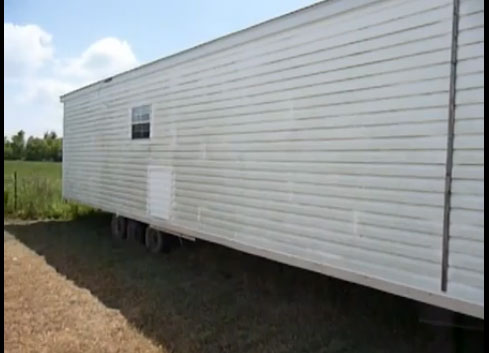 Since there was a surplus of Fema trailers, the government decided to sell some of them. Nowadays you can already purchase Fema trailers from eBay as well, where there are many auctions for used and new Fema trailers. Other websites that sell Fema trailers are Government Auctions, Discount Fema Trailers and Yakaz. On Yakaz you can easily locate a seller which is close to your area, therefore you can go and look at the travel trailer before you buy it.

The price of Fema trailers varies a great deal. While most Fema trailers have one bedroom, a kitchen and a bathroom, there are some bigger ones as well. New Fema trailers with two bedrooms and one bathroom offer enough storage space and living area for a larger family. Such a trailer can be as much as $15,000. A smaller Fema trailer with only one bedroom is about $4000. Used Fema trailers can be cheaper but they are often also very damaged.

They were initially built to replace the tents people were using and to serve as a more comfortable shelter before people found the means to purchase new homes.

A FEMA trailer has one master bedroom with one standard size bed, two bunk beds a kitchen with stove and a bathroom.

The extra options and accessories vary with the model, but most of these trailers have a shower, electricity, air conditioner, refrigerator, microwave and some pieces of furniture – to put it in a nutshell, the trailer has all the basic facilities to accommodate a two-adults and two-children family.

How you can purchase a FEMA camper

Go from Fema Campers to Pop Up Campers Trailer Home