North America is the world’s largest RV market and as a result, it’s also the largest manufacturer of recreational vehicles dictating industry trends.  It does not mean, however, that manufacturers in Europe, Australia and (South) Africa are far behind. In many aspects (new technologies, stylish design, quality of manufacturing, etc), they play a leading role. As a matter of fact,  both - Australia and South Africa are truly dominating the market of Off-Road RVs!

That’s why we like to introduce on these pages leading non-American RV manufacturers. While many of their models are designed exclusively for local markets (metric designs, 220Vac electrical installations, eventually left-side driving, etc…), some models have their North-American versions. Regardless if they are available on American markets, it’s always a good idea to see and compare foreign designs with American ones.

As you will see, many European ideas are truly revolutionary, braking the traditional way of thinking.... 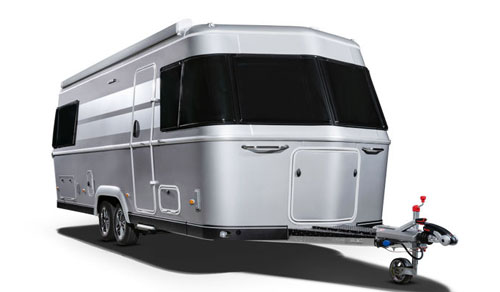 In 2019, Erwin Hymer GmbH & Co. KG (Bad Waldsee, Germany) introduced at the prestigious CMT (Caravanning, Mobile leisure, Tourism) trade show in Stuttgart the new touring model: ERIBA 820. It represents the continuity of ERIBA’s sixty years-old Touring series, although in this case in the luxurious version. Interestingly, for many American RV-ers, Eriba Touring 820, due to its curved shape and shining aluminum skinning will look very similar to famous Airstream models! 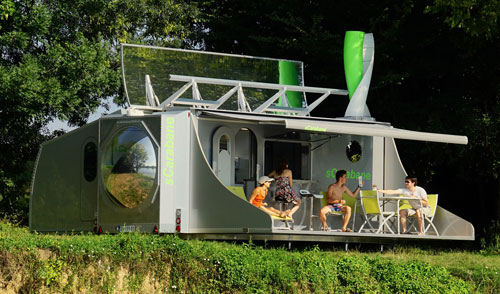 sCarabane (France) is energy self-sufficient thanks to solar and wind energy....

On the road the sCarabane looks “boxy” and quite uninspiring. By European standards with its length of 25.5 ft (7.8m) and dry weight of about 5,500 lbs (2,500kg) it is relatively “massive” (on US roads it will be considered as a medium-size model).

This picture dramatically changes once the sCarabane starts unfolding. Slowly but surely (full set-up may take up to 30 minutes) the segments of sCarabane in a step-by-step process fold-down, flip-up, pop-up or swing-out converting an otherwise unimposing and almost windowless “wheeled box” into a large, bright open space.  It includes two bedrooms, large kitchen, spacious dinette (convertible to extra sleeping space for 2), bath (w/shower and sink), separate toilet and an almost 140 square feet deck with retractable awning. Well, it’s a tiny but well-furnished house on wheels..... 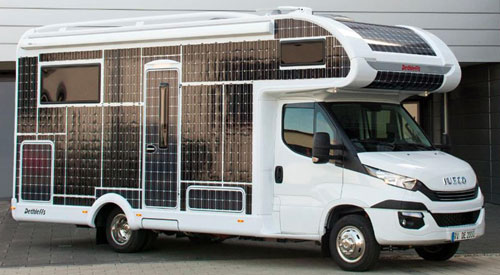 In 2017, at the Düsseldorf Caravan Salon, Dethleffs presented a concept of an all-electric C-class motorhome, hopefully opening the new era of “e.homes”.

Following the “hot” trend seen in the automotive industry, Dethleffs motorhome’s concept model has an electric power-train. Built on the Iveco chassis, it is equipped with a 107 hp (80 kW) electric motor powered by a pack of FIAMM 400V /3 x 76Ah/91kWh sodium-nickel-chloride batteries.....