Comet campers have several hard side options, each with its own benefits but some of the best are those that come with their own bathrooms.

Comet campers have several hard side options, each with its own benefits and bevy of available options.

The goal of each Comet Hard Side is to offer a convenient, compact option for your camping needs.

This is why each one of their hard side campers comes with fiberglass walls and roof, tinted windows, and an outside grill and shower.

However, some of the best hard side options are those that come with their own bathrooms.

This extra convenience makes it even easier to get off the beaten path and to minimize dependency on campgrounds facilities.

Comet offers four different hard side popup campers with bathrooms, the H1235, H1235FD, H1235SB, H1235MD.
While each has similar features, they are all designed for different needs. All have the sleeping capacity for two and an exterior width of 85”. They all have a black waste water capacity of five gallons. 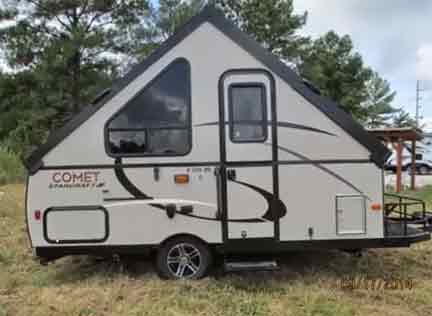 The Comet Hard Side H1235 is the smallest of the four options. It weight about 1,915 pounds and has a carrying capacity of 1,335 pounds. It comes to 60-1/2” high and has a campsite length of 17’1”. There’s a kitchenette with a corner sink and three burner stove directly across from the entrance. Next to the burner is a fridge and cabinet. Across from the cabinet is the cassette toilet and shower, beautifully designed to fit into the limited space. The other side of the camper consists of a dining area that converts to a bed.

The Comet Hard Side H1235FD is the heaviest and longest of the four campers. It has a length of 22’4” and an interior height of 95”. It can hold 23 gallons of fresh water, compared to the 19 gallons the H1235 can hold. Its interior design is exactly the same as the H1235; however, the H1235FD has a 63” x 84” storage deck. This deck offers an amazing amount of space for those who like to travel with all the extras. In fact, the deck is almost half the size of the entire camper and is perfect for bikes, equipment, and extra gear. 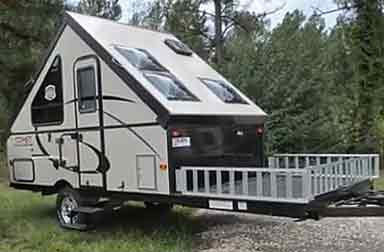 The Comet Hard Side H1235SB is somewhere in between the H1235 and the H1235FD. Coming in at 18’8” long with an interior height of 95”, it’s bigger than the first and slightly smaller than the second. It can hold 23 gallons of fresh water, including what’s in the water heater. While its interior is the same as the first two, it differs in one way. The H1235SB also has a storage deck, but it’s smaller than the one on the H1235FD, and the deck comes with a storage box.

The Comet Hard Side H1235MD is the same length as the H1235SB and only 1.5” shorter in height. It holds 19 gallons of fresh water and has the same layout as the other three. However, what makes the H1235MD special is its angled storage deck. This deck comes with rails, adding extra protection for your belongings while you drive from adventure to adventure.