Kenskill Vintage Trailers are part of legends of the RV industry. Emerging from nowhere, the company brought to the market famed Teardropes and Sports Rovers - trailers that largely outlived their times.

'KenSkill Kamper' is the original name of the company that started manufacturing 'teardrop' trailers way back in 1946 in Burbank, California.

After the initial success with teardrop trailers the company paused for a while until revived by Jim Brunskill under the new name KenSkill Trailers.

The company name emanating out of the parts of co-owners’ names: Kennedy and Brunskill reflected their close partnership.

Kenskill Trailers successfully continued design and production of travel trailers and by the end of 50’s about 18,000 campers had been rolled, which indicates the success it enjoyed among enthusiasts of RV-ing.

It’s a remarkable story given the very modest start with just about 200 “hand-made” units during first few years of operation. In mid-60’s the company Kenskill Trailers was sold to Redman Industries, but the production under brand name was continued till almost mid 70’s.

Kenskill trailers are loved for their big head-room. You could stand up inside of the trailer and do your things without any discomfort.  And although today it seems like a mandatory requirement, at those “pioneering” times when the RV industry was just emerging from the “darkness” it was a great design.

These days, Kenskill vintage trailers are subject of “adoration” and hence are in great demand from enthusiasts. KenSkill fans had formed a big club which organized many caravans in Western US. 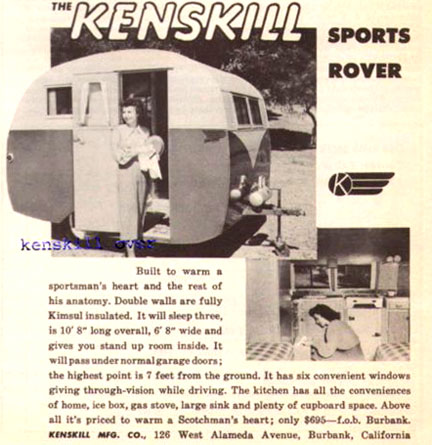 Kenskill Trailers advertised the Sports Rover as a one “Built to warm a sportsman’s heart and the rest of his anatomy.” It is said that 18 trailers were rolled out in 1946 by the company. Although very similar to low-profile teardrop models, Sports Rover provided enough stand up room. With the height of just about 7 feet from the ground at the highest point it could be parked inside of any garage.

The Sports Rover had length of 10 feet and 8 inches and width of 6 feet and 8 inches, providing enough room to sleep three persons. Surprisingly (as for those times) it had 6 windows providing great amount of light and good visibility during driving. The Kimberly-Clerk manufactured Kimsul insulation inserted between double walls added to the comfort (warmness) of the small mobile home. The kitchen provided ice box, gas stove, large sink and enough storage space.  The weight of Sports Rover was just mere 2000 lbs. 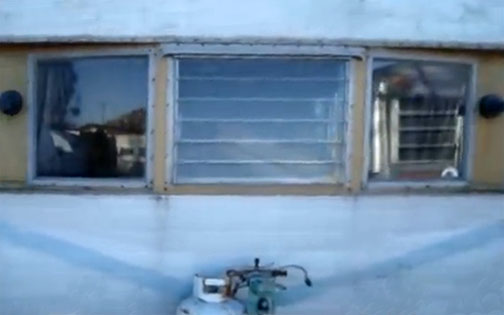 Introduced in 1960 X-15 ½ was America’s first two story trailer, a format which created curiosity at that time but did not last long. It has two bedrooms and space to sleep eight - by far the highest number in any form of camper trailers at those times. The stripes of aluminum on the exterior interspersed with glass windows presented a neat look. The model came with Oriental Ash wood interiors. The modern facilities included showers and toilet but also standard equipment typical for those times like four-burner gas stove, ice box, large dinette, storage space and hard wood furniture.

All the K- series models came with the best hard wood interior inside and aircraft grade aluminum exterior. The nice stripes of aluminum ribs with contrast paint gave the trailers in the series a stylish look. Large sleeping areas were carved out of the dinette and lounge areas. The elegant glass windows on all sides added to the trendy look of the trailers.