All pop-up campers have one feature in common - that is the roof lift system.

Each pop-up camper must have this system because if the roof isn't raised you won't be able to use your pop-up camper.

All pop-up campers have one feature in common and that roof lift system.

Each pop-up camper must have this system because if the roof isn't raised you won't be able to use your pop-up camper.

Pop-up camper roof lift is actually a system containing pulleys, springs, cables and winch. All this is used in a system that raises or lowers the roof of the pop-up camper. And this is common for literally every pop-up camper no matter the make and the model. 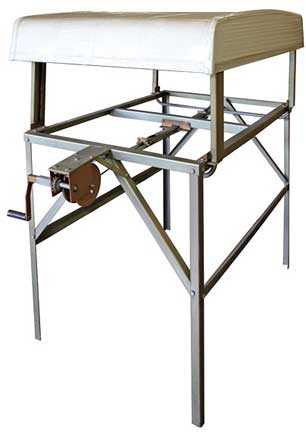 The Schwintek Power roof lift represents the innovative technology that has improved the concept of the roof system. This system has sensor electronics, which stop the system when the roof is as its optimal height and when the system senses too much weight on roof it shuts down the system off. The entire roof lift system is placed under furniture and thus it is not exposed to the elements.

The Coleman roof lift system unlike the other roof lift systems, doesn't connect directly to the cable. There is a crank that is connected to the shaft which transmits movement through a chain to a threaded rod which goes through the center of a distribution block. When the crank is turned into one direction , it turns the threaded rod and that is what moves the distribution block backwards or forwards in the channel. This causes the cables to extend and retract the telescoping tubes which actually raises or lowers the roof.

The Jayco roof lift system consists of a winch and cable system to erect the roof. The system is very durable but like everything else after a long time of using the pulley, the cables and other important parts may be damaged. Most parts of the Jayco roof lift system doesn't need any maintenance and are very easy to access so if anything damages it can be repaired at home which makes them user friendly.

Most pop-up camper roof lift systems require understanding and occasional maintenance of the system which will result use of your vehicle without any trouble for years.

May be camper roof lift is not a must but it can make a life easier!

The manufacturers of the pop up camper roof lift sure hit the nail on the head. These units make lifting the top of the tent pop-up so easy, even a child could do it.

I seen an older couple in North Dakota that had a Dutchman pop-up camper and they could have used a roof lift. They enjoyed camping so much, but he was finding it hard to raise the top because of his hands.

I told him about the popups I seen in North Carolina that had the roof lift and it was a 2000 Apache. We talked about it and he decided he was going to check into the lifts and see if he could have one installed on his pop-up camper.

I saw him the next year as we always end up there together every year and he had done what he said he was going to do. He said it made everything so much easier, that even his wife could raise the top.

I was happy to see he was able to get the tent pop-up top lift for his camper as they just love traveling around the country with their popups and have so many stories to tell everyone. Although, many campers always volunteered to help them, they still wanted to have that independence, which they fully have right now.

You can add a lift kit to popups no matter what the year is you have and they work great. The pop up camper roof lift does not cost that much money and I think anyone would be able to afford the lift kit in his or her campers. The kits require installation and you will find most dealers will do this for a small fee. You can however find someone that might be able to do it for you cheaper.