Shasta Trailers – from mobile housings for US armed forces after WW2 to stylish, winged, luxury camper trailers like Shasta Airflyte till these days widely admired by RV-ers

Built in 1941 in Los Angeles, California and originally designed for housing members of US armed forces, these time-honored trailers has been a rage with campers all over the western United States.

In 1958, Shasta Company expanded itself with opening new production facility in Goshen, Indiana.

The ‘wings’ on the rear side were essential identifiers and the most distinguished feature of Shasta model since 1960s.

The first model rolled out was bread loaf shaped and was very aptly named as cosy cruiser. The cosy feeling has endured among camper lovers and the model is witnessing great revival interest in the recent times.

In 1976 Shasta was sold to Coachman Industries; they continued to manufacture trailers under the brand name Shasta till 2004.

Here are some of the Shasta models that were popular:

The Shasta 1500 sleeps six with set of convertible beds – each for two persons. One bed was configured from the dinette; second one was at the rear lounge while the last one was a foldout bed from above. It’s the second smallest camper they made next to the Compact measuring just 14’4″ from bumper to tow hitch and 6’6″ wide. The weight at 1440 lbs suggests easy towing. The ‘box’ itself is a little over 11 feet long inside.

The model has all modern conveniences such as oven control, automatic oven ignition, 3 lighting systems, ice refrigerator and Thermo-Thick insulation. 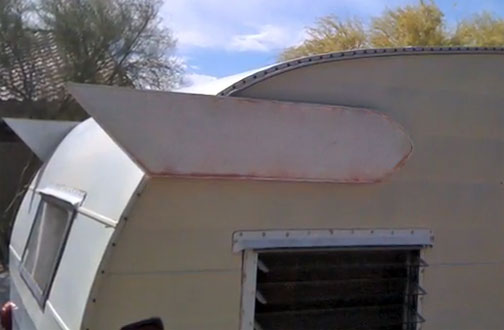 Shasta Compact is larger, more spacious, yet featherweight. It weights only 1,125 lbs., including 174 for the hitch. The aerodynamic lines are beautiful, connoting grace and speed. Colour coordinated throughout, lovely draperies, luxurious upholstery all that was contributing to the charm. Features included deluxe range with oven control and pilot light, vented hood, gas refrigerator, 16 gallon water tank with pump, plus park water inlet. There was also versatile electrical and gas service: 110 volt, 12 volt and LPG lighting. 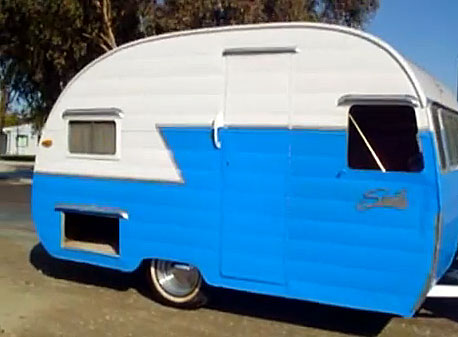 This model introduced in the early 1960s came with many new and luxurious features for user’s comfort. With a ceiling height of 6’4” interior was comfortable for walking. Airflyte Deluxe was finished with real hardwood including dinette; it had more roomy lounge and many sleeping options with one pull-down bed from the roof. With dead air space, quadruple flooring, three lighting systems, chrome galley moulding interiors and more storage area Deluxe targeted more demanding clientele by making life in the camps complete and comfortable.

This model introduced many frills such as awning roll, full length screen door, fourteen large windows and twin butane tanks – features that were appreciated by buyers at that time. They gave a lot of attention to lighting with eight 110 volt and three 12 volt lights. The manufacturer combined beauty and comfort in the Twenty Model. The construction was sturdy with electrically welded thick channel frames. The side walls were insulated with fibreglass. The body has been built with steel reinforcing plates to add to safety features.

Skyflyte came with pre-baked enamel aluminum which gave the new trailer a shiny look as well as an indestructible feel. It was offered in Colonial White and Royal Gold with Mesa conformation. Interior has luxurious look with ornamental shelves, decorator styled furniture, wall to wall carpet, fixtures and draperies. Skyflite 27 has two entrance doors and a big storage cabinet. The centrally located toilet comes with all conveniences one may think of. There is enough space to store water, both cold and hot. Skyflyte weighs 4600 lbs including hitch weight.