Teardrop trailers were some of the first designs on the market back in 30s; today renewed interest made vintage teardrops priceless and modern designs much sought by customers.....

The stock market crash of September 1929 in the United States was the beginning of the great depression that circled the globe.

Unemployment reached an all-time high of 25% in the United States.

As the depression spread and grew over the world, unemployment hit 33% in some countries.

By the late 1930s some of the effects had begun to fade in the United States, but in other countries it persisted right until the end of WW II in 1945.

Of course nobody had any spare money for vacations so if you were working and wanted a vacation you picked up a copy of Science & Mechanics, Popular Science, or Popular Home Craft, and built yourself a little rolling bedroom with an outdoor kitchen on the back and drove into the hills for a holiday. 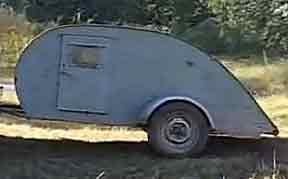 One of those "nameless" teardrop travel trailers probably made back in 30s...

All of the early ones were home-built.  The earliest known is dated around 1934, but there is likely no possibility of identifying the original since it is probably long gone.  Originals were made of wood and would now be over 80 years old, so it’s reasonable to expect that they were disposed of, rotted away, or converted to some other use.  The Alpha Teardrop was first made available in a Dec/1936 & Jan/1937 pair of magazine articles, as a set of plans, and lots of people probably undertook to build them.

From the early 1940s until the early 1950s Universal Trailer Corporation manufactured the Tourette (as in “small Tour” rather than the syndrome) weighing in at 720 pounds at a cost of $750.  Nowadays you can’t even get hamburger for a dollar per pound!  Of course $750 might have been a year’s salary back then.

Between 1953 and 1955 Bennet Petersen and Roy Greenwood, who designed the much sought after Benroy Teardrop, manufactured 480 units.  They sold at the astounding price of $420.  Sales dropped off in the 1950s and Teardrops pretty well vanished.  That is until the World Wide Web came along and the plans were suddenly available online in the 1990s.

Either through nostalgia, or the desire to be onboard with the latest pseudo-new thing, teardrops grew and developed to possess an astonishing popularity.  The difference is that now they could be manufactured with super light modern materials like fiberglass, reducing their weight and consequently increasing their cargo capacity.

Moreover, in some cases they are actually light enough to be towed by a medium to large motorcycle.  This makes adventure a lot more accessible and economical without necessitating utilizing a car or truck. 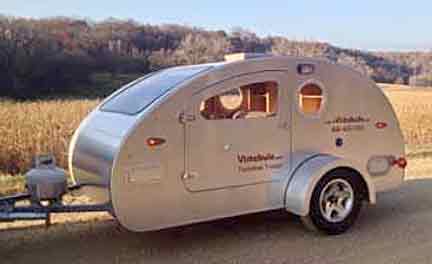 You’ll see a surprising number of them that if been specifically designed to look like Vintage Teardrops.  The paint and styling almost perfectly mirroring (for example) a beautifully restored 1949 Hudson; some are painted in stark 1950s paint color choices like robin’s egg blue to match the 1957 Chevy that is towing it.

One particularly popular (albeit rare) model is called the “Bolus”, all skinned in silvery aluminum.  It sold for $90,000 at auction.  Clearly people have some disposable income nowadays and paying 10 or 20 times the original purchase price to own a piece of history.

Good for them!  I hope they’re very happy with their purchase.  Meanwhile if you want to experience the Teardrop Culture, you can buy a brand new one with all the modern conveniences, such as a digital entertainment center for watching movies, LED-lighting for electrical efficiency, refrigerators, and air conditioning for ultimate comfort.  You can add porches, add-a-rooms for dressing while standing up or to keep your porta-potty, or in some cases, a tent on top for additional sleepers.

What more could you ask?  Let’s go camping!