Aladdin produced trailers during the brief period starting from 1963 to 1968.

The company was taken over in 1968 by new owners who kept on producing trailers till the early 1970’s.

The brand name is derived from the famous Middle East folk-tale of Aladdin.

The Aladdin’s name was not only used for trailers, the whole concept was also brought into publicity campaigns.

For example the company coined the famous slogan for the trailers: “Aladdin Trailers & Campers … are your Magic Carpet to Vacationland.” Not surprisingly, the models names included Hideaway, Magic Carpet, Sultan’s Castle and Arabian Night. 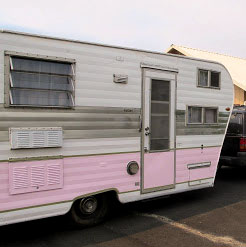 Aladdin has been manufacturing 15 foot models since the beginning of the commercialization of first trailers - that is, since 1963. In 1968 the Hideaway trailer was introduced. It weighted approximately 1300 lbs, was able to sleep 6 people, having 2 beds in rear (pull out bunks). Extra sleeping space was provided by folding the dining table. Hideaway had three-burner stove, heater, dual mode electric/gas fridge and electric/gas lights as well as hand pump sink.

In 1966 Aladdin came out with “Sultan's Castle” model 16 SD-6. It was 16ft travel trailer based on earlier 16ft models, however this one had completely redesigned interior.   The traditional bunks were replaced by the gaucho (sofa that extends to become a bed), plus shelf or kid bunk above. Looking left from the door, the kitchen galley and potty room were on the street side of the trailer, and the convertible dinette/bed area was on the curb side. At 16 feet, this trailer was roomy enough for two friends or a couple to share, and perfect for taking the grand-kids for the camping journey with you. 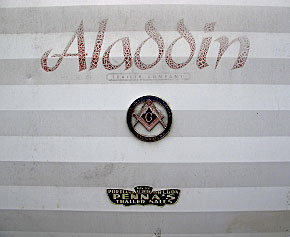 This picture is "self-describing

In 1966 Aladdin came out with a small canned-ham model known as Hideaway with a length of 13 feet 7 inches. The name is an allusion of the ‘hideaway’ where the folk-tale character goes back from time to time in the Aladdin’s fairy-tale. The Hideaway trailer had a width of 84" and inside height of 76". The total weight of the trailer was 1500 lbs with a hitch weight 150 lbs. The model came with an ice box, 18 gallon water tank, 3-burner propane stove, new gas light, 3 electric lights, 2 outlets and 2 propane tanks.

This trailer was manufactured by the reincarnated Aladdin Company after all the original owners were gone. The length of the model was 21 foot. It had sufficient interior space to sleep four or five persons. It came with two propane tanks, multi burner stove and heater. It had water pump that supplied only cold water to kitchen. The model was fitted with portable toilet. Fridge, a wide sweep sink, closet, overhead and floor cabinets completed the kitchen galley area.