Do you know that Apache pop up camper groups hold annual meetings to muse over their adventures....

Apache pop-up camper is a very popular brand in the camping world and among all campers who enjoy traveling around and spending an interesting time in the wilderness.

These pop-ups are pulled behind the vehicle like trailers and when you stop at some campsite you like all you have to do is to set it up which is quite easy – the windows and the ceiling simply pop up from the inside of the base of the camper.

And your favorite camper is ready to use and you can enjoy as long as you like. 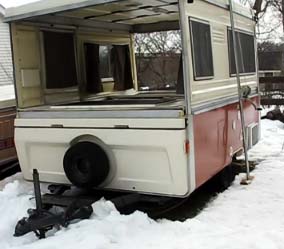 The first Apache pop-up campers were produced in 1957 when Gene Vesely build a trailer where he could store his camping gear.

Nowadays they are used for camping offering enough living space inside. When not in use they are very easy to store but when fully extended they provide lot of space.

Apache pop-up campers are considered to be highly convenient not only for short but also for long trips.

Although the company was famous for manufacturing canvas tent campers at first, in 1970 they started producing hard-sided models. All pop up campers made by Apache were known for their quality and durability and have stood the test of time for three decades.

The last Apache pop-up camper model was made in 1987. In spite of that these pop-up campers are often sold today because they became very popular and have proven to be an excellent choice when buying pop-up camper.

Apache pop-ups became mostly popular not only for their quality and size but because most owners of these pop-ups enjoy how fast and easy they are to set up. It only takes a few minutes to lift the top of the camper up, once the camper is level.

Most of the Apache pop up camper models are equipped with all the amenities that you may need while on the road. A sleeping area is large enough and also kitchen is great too.

There is quite enough storage for placing all the things you will bring with you. Also there is a table that can be converted into additional bed. In the kitchen area there is a sink, a stove and cabinets for storage.

All in all Apache pop-up campers are very comfortable and very interesting pop-ups even they are not being produced any more. Real camping fans are very fond of them because they can rely on them. These campers are made of quality materials and last long which is very important in order not to buy camper every second year.

The Apache pop up camper groups hold annual hookups, reminisce about all their adventures, and tell stories about their campers and any problems or revisions they have made to the camper in order to be comfortable while traveling.

Where they have these annual events depends on what the group agrees on and the time is usually decided with help from other Apache owners. People that live in Arizona (AZ) and Arkansas (AR), people who live in any state get together to talk and share fun times and talk about all the good times on the road.

All campers share this type of camping group; whether it is a Coleman camper or a Jayco camper, these groups have been formed for years. Starting back around 1981 or 1982, people have gotten together with other campers that share the same make of camper to form groups that give tips and information on just about anything about these campers.

The pop up trailer campers on the road might just be traveling to a get together for another year of fun and excitement. Sometimes these groups have a festival night planned with food and drinks as well as activities planned for the festive event. If you belong to one of these groups of campers, you have many friends as you meet new people every year that join the group.

The Apache pop up camper comes with many accessories and people tend to like these campers for their spacious interior as well as their exterior looks. The pop up trailer makes for great camping adventures and sometimes a few rough times depending on your threshold for weather changes that happen in every state you camp or travel. Many forums and groups invite campers to chat and share information when the weather does not permit camping.