Argosy trailers were made by Airstream Company starting in 1971. The production was rolled out in the plant in Versailles, OH. near Jackson Center.

Commonly  they were recognized as “Painted Airstreams”.

It continued to be rolled out till the early 1980’s. Argosy was in a way the design drawing board for Airstream.

They always started a new feature in Argosy and then introduced in their main models. Take for instance the front wrap windows that give so much a character to Airstream retro trailers. It was first tried out in Argosy before it became standard feature in all models.

While the main Airstream models were built with shiny aluminium exteriors the Argosy model used steel end caps and aluminum panels that were damaged or blemished. The Argosy trailers have the one-piece steel segment in the front instead of the 5 aluminum segments. The Argosy trailers also had slightly different interior arrangements.

In the '70's Argosy created a series of small trailers called the “Minuet”. These were correspondingly:  6.0 meters (20'), 6.7 meters (22'), and 7.4 meters (24') Minuets. These compact small-sized trailers were built to “hold more and weigh less” Thanks to their extra light weight, Minuets could be towed by intermediate range cars such as Granada, Nova and Volare. In a way there were precursors of today’s lightweight models. 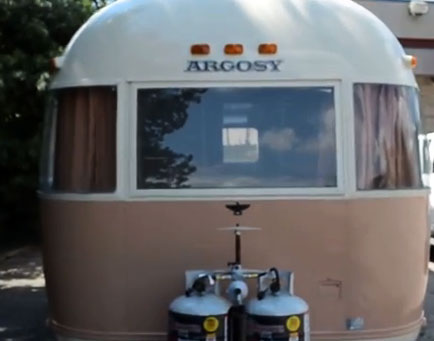 This smallest member of the Minuet family had weight of 2450 lbs with a hitch weight of 395 lbs. This model featured a front dinette area which could be converted into a comfortable alcove when the dining table was lowered. The alcove made space for double bedded sleeping area. A pull-out lounge layout option model was also available (it was standard feature in 24’ Minuets). Despite its small size, Argosy 20 could sleep four persons. The kitchen had adequate counter space with three-burners stove, refrigerator and sink. The shower and toilet were in the back of the trailer. 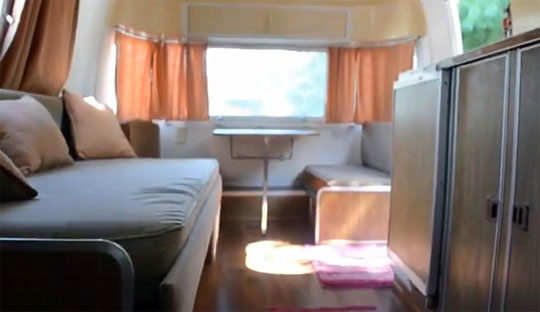 ... and its spacy interior - here the living area!

This was the mid-sized model of the popular Minuet series. The entrance door was leading to the dinette area located on the right – in front part of the trailer. The dinette space may was converting to a two-bed sleeping alcove by lowering the dining table. A pull-out lounge option that was a standard feature for the 24-foot model was also available with this mid-size model. The total body weight of the trailer was 2725 lbs and the hitch weight was 280 lbs. A three-burner stove and double sink were basic features for the galley.

This model was the largest of the Minuet series with the length of 24 feet and 3820 lbs dry weight. The hitch weight was 510 lbs. But it was for the reason - thanks to its larger size, the model featured separate living room and bedroom areas offering privacy. The kitchen was larger and more accommodative with all the standard equipment and appliances. Unlike in the two smaller models, in Argosy 24 the kitchen galley was on the street side of the trailer. The toilet and shower area were located at the back of the trailer.