Bethany pop-up campers have very long history and are considered to be one of the most famous campers in the camping world.

The history of Bethany pop-up campers began in 1958 when Bethany International was founded and manufactured its first camper.

Shortly after the company was being founded, they manufactured 4 Tear Drop trailers and 15 House trailers.

At that time, all pop-up campers had canvas top, while Bethany International made different design-a light camper with strong top, which was made from fiber glass.

Their first model was named The Bethany Vacationer. This pop-up camper featured multifolding fiberglass superstructure, one person could set it up in just 4 minutes. 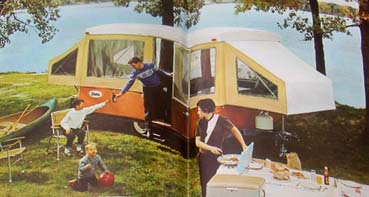 It had seven-foot headroom in center; it was water and insect proof. Bethany Vacationer pop-up camper could accommodate four or five people for sleeping; it had dinette area, zipper nylon screen window in front and zipper nylon screen door in rear. Another interesting feature Vacationer had was that it was very low when closed.

Next models made by Bethany International experienced some improvements. So model made in 1959 had a side pull-out bed. A new model named The Chief had two pull-out beds on either side and fiber glass roof. Also, it featured dinette table which could be dropped thus making more space for sleeping.

Another model by Bethany was The Big Chief, which was simultaneously the largest pop-up trailer in the lineup. However, this model differed from the others because it didn't have the fiberglass roof. Instead, it had a canvas top.

The next models manufactured by Bethany International were The Coralette and The Travelette. The first one was the economy model with fiberglass body and canvas top and could sleep 4 to 6 people. The second model had an aluminum body and fiberglass roof.

Couple of years later they introduced their first large pop-up camper with hardtop, slide-out beds on the front and back. It was called Citation. The roof was made of aluminum. It could sleep 8 people, had dinette table that dropped to form another bed and came with all the kitchen amenities.

The next Citation model experienced new changes such as fiberglass roof instead aluminum. After these changes Bethany pop-up campers got a new lift mechanism for raising and lowering the top which became a very recognizable trademark on all of Bethany 's pop-up campers.

1974 model is a great pop-up camper, which didn't use typical cable lift system. Instead, it had springs and counter balances. It slept 8 people, had a heater, sink, power converter, ice box, lots of storage. It was very light pop-up, which could be towed by smaller cars.

All next models manufactured by Bethany International had larger living space, 3-burner gas range with oven and counters.

In 1980 Bethany International sold the business to Texson Trailer Company of Waterloo, Iowa with the rights to use Bethany's name for two years after the sale. Although Bethany pop-up campers are not manufactured any more these campers could still be found on the camper market and there are numerous camper lovers who enjoy their vacations in Bethany pop-ups.

Bethany pop up camper is a nice camping unit.

The interior can decorated to invite guests as well as supplies you with a great living area. The 1968 Bethany pop up trailers and the contemporary campers have changed quite a bit.

The camper from 1968 is made with real wood. The size of the older Bethany camper is bigger than the newer ones and used to hold more people than the new ones do.

Now the Bethany pop up camper even if it is a 1968 and needs work, would be well worth the price. I know a guy who buys older and stronger built tent pop up trailers and fixes them up. Yes he puts new mattresses and accessories in them, but he swears by his work. He believes that the older one are built to last, but only need some minor repairs and then can be sold or used if you are doing the work for yourself.

I was in Iowa or maybe it was Indiana when I saw a Bethany pop up camper and I remember thinking how nice it looked as well as having a pretty solid frame for its age. Now I remember it was Kansas where I saw it. The people were actually thinking of putting it up for sale and buy a newer one, but they were having a hard time parting with it.

They had been traveling for years in an older Bethany pop up camper and just weren’t sure if they would find a camper that they could be as happy with as they were with this one. When you have a camper that has been with you a long time and has so many memories, it is hard to make that choice. They had only replaced the canvas once and had put so many accessories inside that they thought they would never find the kind of camper again.

A Bethany pop up camper is a long time runner up with Coleman and has still managed to stay around a long time. If you get yours hands on a Bethany camper, I would consider yourself pretty lucky. The older ones are gems. The sturdy built and custom interiors can be a rare find. Even if you have to replace a canvas or the awning, you still can count yourself lucky enough to own one.

The Bethany pop up camper can be seen on many sites on the internet and is very nice to look at. The exterior and interior of the Bethany, especially the older ones are strong and built to with stand many situations.

So if you find an older Bethany camper, if the price is right, get it. If it needs some new décor inside, decorate it. You will be very pleased you did.

This will be an adventure all by itself when you go looking for an older Bethany pop up camper. Try and find a 1968 Bethany and compare it to pop up campers today. You will see a big difference in construction and durability. Happy hunting, I know you’ll enjoy the older Bethany once you see it.