After initial success and growing demand they shifted production to the plant at Pico Rivera.

Then in January 1947 Kit moved to a 100,000-square-foot manufacturing facility in the harbour area of Long Beach.

The company also set up two units at Caldwell, Idaho when its operations grew substantially.

The company is still operational today. Originally owners planned to manufacture teardrop trailers in shape of knocked down assembling kits.

This plan was subsequently abandoned in favour of producing full length trailers, but not in shape of assembly kits but fully prefabricated trailers. Kit trailers gained immense popularity in its initial years which coincided with the return of service men from the WW II to homeland.

The spirit of camping and “outdoor” life was high among the young army returnees.
Kit exploited this high spirited demand for trailers to the maximum. In 1946, 3500 Kit campers were produced and delivered. By the end of 1947 Kit’s manufacturing had gone up from two per week to 120, and sales had climbed from $1,000 to $50,000 weekly. 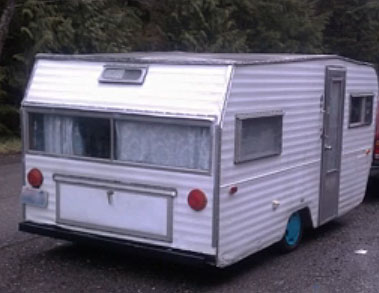 The company rolled out its first recognized model Kit Kamper in February 1946 at a trade show. This model had an exterior body made of war-surplus aluminum and fiberglass fenders (after the war “strategic” materials still had to be obtained from surplus markets). The chassis was made of 2"x1" steel U channel (when it was available) or from 1-1/2" round tube steel tube otherwise.

Wheels were from Jeeps salvaged from sunken ships. Many had bullet holes in them which were welded up. Exterior skin was of .032" thick 24S-T aircraft grade aluminum. The manufacturers gave great attention to making the life inside the trailer comfortable with innerspring mattresses and an all-aluminum kitchenette with butane stove and icebox. This model released at the trade show immensely boosted the popularity of the new trailer. The response exceeded all expectations, with nearly 500 orders booked.

This model, introduced in 1952 was touted by manufacturer as the most fashionable trailer. It had Panelized Floating Wall exterior made of aluminum and fiberglass which did not bulge or buckle even under harsh conditions. The inside was marked by its seven feet high ceiling and maximum usability of area (which was 95%). There was a larger bathroom with shower, tastefully appointed kitchen, sophisticated and large glass windows besides ample storage space on account of cabinets, overhead and floor lockers and closet.

This model was introduced in the 1956. The trailer was based on Panelized Floating Wall technology that was weather tolerant and sturdy. Thanks to this technology the trailer was able to withstand extreme climatic conditions of 28 below to over 110 above. Probably because of these heavy duty features, US government had placed large orders of the model for GIs. Of course manufacturer (Kit) used this government’s order for publicity to its advantage….