Manufactured by the company Richardson Home Corporation based at Elkhart, Indiana, Richardson trailers came in various sizes, ranging from 22 to 43 ft.

They were designed in the shape of popular at that time “canned-ham”.

A two-story model was introduced in 1955.

In the same year Richardson claimed in a full page advertisement that 40,000 people were at that time living in Richardson trailers.

It led many to think that probably the manufacturer had already rolled out that many trailers by then.

However it was only company’s gimmick, they had arrived at the number by taking the maximum number of persons than can sleep in their trailers (from six to eight).

This publicity greatly served the maker’s cause as their trailers grew in popularity.

Richardson introduced something in the year 1955 that was never attempted before in the world of camper trailers. An ingenious two story model was rolled out with the trailer length of only 35 foot. The upper level had two bedrooms with a rear exterior balcony. A walk-out door opens to a sun deck in the upper story. The stairway and the upper bedroom were carpeted. 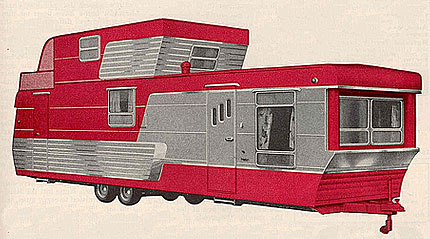 Richardson Regent Bi-Level trailer even as of today looks impressive and seems to provide real "Home Away" environment...

Richardson made major rearrangement of facilities with this model introduced in 1958. The kitchen was moved to the rear of the new model mobile home in an effort to facilitate easy supply of groceries through the rear door. The kitchen was roomier with four jalousie windows. It was fitted with colorful appliances and metal cabinets. The kitchen door opened to the living room. The bathroom was conveniently located near the rear door with commode, shower and wash basin. The roomy bedroom in the front had its own private door, a safe and a wardrobe. All rooms in this model were completely enclosed for greater privacy. There was more storage space and cupboards. 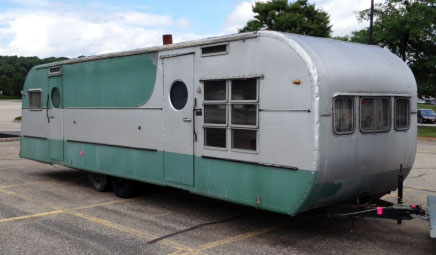