These trailers were manufactured by Serro (Scotty) Travel Trailer Company in Irwin, Pa between 1957 and 1997.....

Scotty producers took an active interest in making the owners develop a close bond amongst themselves around the theme of Scotty.

These owners in a way, became a family when they gathered at a company promoted campground named “Scottyland” to camp together.

Large clubs sprang out of this and their camping together became known as “Scotty Time”.

The original campground is still open in Rockwood, Pennsylvania and it welcomes all campers.

Scotty made an entry into trailer business by producing teardrops. Then gradually they moved to the production of 13 foot and 15 foot trailers.

The popular models were Scotty Lite, Sportsman and Hilander.

The vital stats for Scotty Lite teardrops include total length of 11’9”, outside width of 78”, outside height of 81”, inside height of 58.5”, approximate dry weight of 960 lbs and hitch weight of 90 lbs. As it weighs less than 1000 lbs the trailer can be also towed by small family cars. The original version of Scotty Lite was introduced back in 1979, it’s interesting to mention that the production of its modern version was resumed in 2011 by Serro Scotty Worldwide. 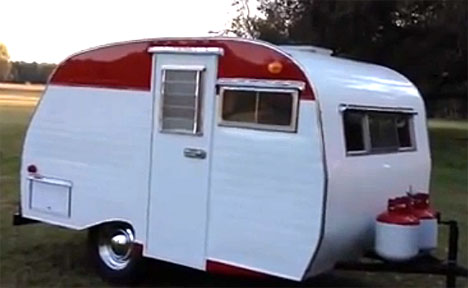 Sportsman was small in size but big on features. While the total length is 15'2” the inside length is 124” and correspondingly its width 82”. The outside height is 8'3”. Being small the trailer is easy to tow. Standard features such as stove, furnace, refrigerator and sink make Sportsman a unique trailer.

There is customization possible with features like A/C, awning, and spare tire. The trailer sleeps three with a single front and a full sized rear bed. The floor of sportsman may be dropped down while parking providing headroom of 6 ft and 1 inch. Sportsman has canned-ham design with aluminum exterior. The lighting system is sturdy with exterior 110v receptacle, 25’ long 30amp power cord and 7-way plug. There is facility for city water hook up.

The approximate dry weight of Sportsman is 1780 lbs with the tongue weight being 245 lbs. Beds are 82” x 28” (Dinette Bed) and 82” x 54” (Rear Bed). There are five separate storage cabinets and two fold-up tables. Sportsman trailer was introduced in 1958 and it had really seen some success. Later this model was called “Gaucho”.

Hard to believe :-) - This is interior of the 1961 Serro Scotty Sportsman "Gaucho" trailer. It's true that most of what you see inside is new, however it reflects and mimics the original design...

Designed to comfortably sleep four with a single front bed, full sized rear bed and an overhead bunk Hilander combines classic styles with features essential for comfortable living including a shower/toilet combination. Hilander provides for more up to date features and fixtures besides its standard equipment such as sink, stove, furnace, refrigerator, hot water heater and spare tire. Hilander comes with many safety features which give a lot of reassurance to the adventure camper. These include a full frame underneath, fire extinguisher, escape hatch and a deadbolt door lock.